Back to Reading Club 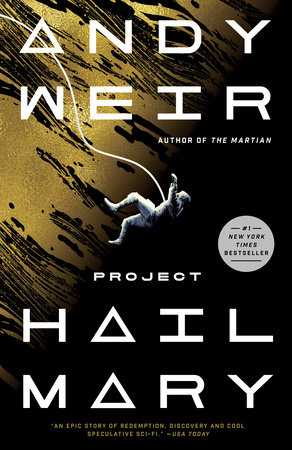 I "discovered" author Andy Weir at the movies, when The Martian came out. Now that was a great movie! It had everything I love about science fiction, and the themes, the pacing, the characters. It all worked. So Andy Weir made it to the top of my to-read list, but I was just a little scared. I mean, how much of what I loved in the movie was Andy Weir vs. the director, actors, screenwriters, etc. Reading Weir could be a major disappointment. I shouldn't have worried about it. After reading Project Hail Mary, I can attest that Andy Weir writes exactly the kind of science fiction that I love.

So what is the science fiction I love? First and foremost, it has to have science in it. Of course it can take liberties, e.g., faster-than-light travel or psychic powers or any number of shortcuts. But there must be some scientific approach to the world. Second, it must have big ideas. The science must affect individuals or groups in some way. Third, it must have honorable characters. Yes, they can have flaws, and the flaws can be big enough that there are prices to pay. But they must be characters who make the right choices, characters who do the right things, characters I can look up to. The way I see it, why waste my time reading about a "normal" person having a "normal" day? Finally, it must ultimately be optimistic. Science and technology can create problems, protagonists have to make sacrifices and take risks, failure and disaster may threaten to take place, but in the end the protagonists do the right thing and find a solution to all problems, maybe even using science. That is the science fiction I love. That is the science fiction of Heinlein, Asimov, Niven, Hogan, Benford, Bova. And to that list I can now add Weir.

How does Project Hail Mary fit into this genre? The core approach is science, science, science. The protagonist is a scientist who is presented with a mystery: Who am I, where am I, and why am I here? He approaches the mystery with scientific flair, using science and basic experiments to conclude that (1) he is in space, and (2) the solar system he sees is not the Sun.

More than that, the entire reason he is in space is because humanity is in a crisis because the Sun is producing energy at a lower rate. The Sun, you see, is cooling. Why is this happening? Here Weir answers the question by turning not to physics, but to biology. He describes a fascinating organism that is infecting the Sun. Weir gives us much detail on the organism's biology, lifecycle, even an entire alien ecology. The biology is also interesting because it uses quantum physics extensively. This organism relies on quantum physics to amass enough energy to sustain its life cycle, which literally spans solar systems. There are even equations and physical laws described, and yes the numbers work out (I checked some of them).

As for characterization, Weir gives us a wonderful protagonist, Ryland Grace, who appears to be a hero straight from central casting, but who ends up to be deeply flawed, and yet who manages to overcome his flaws and become the hero we once suspected him to be. Other characters that we encounter through flashbacks are also memorable, if perhaps less believable. But the absolute best character bar none is Rock, an alien who becomes our protagonist's best friend and savior of his own species. Here again, Weir gives us an alien, with an alien ecology, alien chemistry, and alien means of sensing and interacting with the world. And all of that following the science.

And oh yes, Ryland Grace and Rock save their species from extinction! By using science and sound engineering, of course. In the process, they discover new technology that can also be used to harness nearly unlimited energy and save Earth from climate change.

So there you have it. A story that places science first, with huge ideas (entire alien ecologies and the destruction of entire planetary systems), honorable characters (human and alien), and with a resolution that uses science not only to save Earth but to leave it in a better place than we found it. This is my kind of fiction.